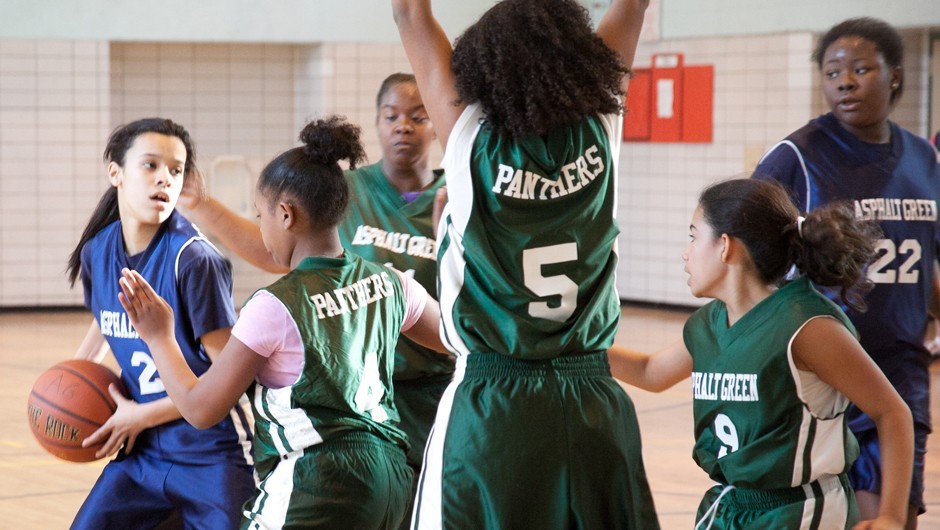 Thanks to a grant from the Patrina Foundation, Asphalt Green was able to send 96 Harlem middle school girls who play basketball in our free Community Sports Leagues to leadership workshops with the Sadie Nash Leadership Project. The Sadie Nash Leadership Project promotes leadership and empowerment for young women by equipping girls with the skills to be agents of change in their own lives and in the world.

The players participated in two workshops during January. Led by Sadie Nash facilitators, the one-hour sessions included basketball drills on the court to help prepare players for the season, as well as team building activities.

“We wanted to work with the Sadie Nash Leadership Project to help build team spirit and improve attendance at games and practices,” says Beth Rotenberg, Asphalt Green’s Community Sports Leagues Manager. “Sometimes the sport itself is not the primary driver that would encourage a girl to attend a game, the friendships with the girls on their team is.”

The workshops provided the girls with a safe space to get to know each other and speak openly. For example, to help create a positive team culture the girls talked through ‘What Would You Do’ scenarios related to bullying, lateness, winning and losing, and poor attitudes. In addition to building team camaraderie, girls learned how to support each other. At the end of each session the girls played Hype Buddies, which includes pulling a name from a hat and hyping up the girl selected by sharing one thing you admire about her. To keep this positive momentum going, the girls will continue to play Hype Buddies throughout the basketball season.

The young women who participated responded very positively to the leadership workshops. One participant shared that her favorite part of the workshop was having the opportunity to hear the other girls’ thoughts, ideas and fears.