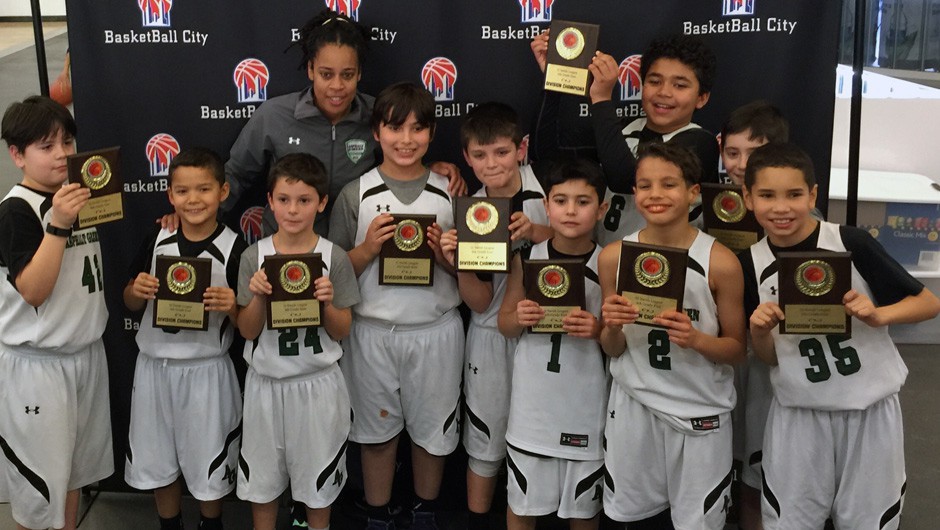 The Asphalt Green 10U basketball team took home the championship crown February 27 in the 55swish league. The team, in its inaugural season, defeated NYC Phoenix 47-45 in the finals in a double overtime thriller to claim the league title.

The weekend was filled with quality basketball, and all teams had a great showing. Asphalt Green’s road to the finals went through Team Fastbreak in the semifinal match. Both teams left their hearts on the court, sending Asphalt Green into its first overtime of the tournament.  With six seconds left, Elijah found the net and sent Asphalt Green to the championship in a 37-35 victory.

The crowd was electric during the championship game. Friends and family from both sides showed up to cheer on their team. Asphalt Green took control early, leading until late in the second half. In a turn of events, Elijah fouled out of the game, and NYC Phoenix capitalized on the opportunity, taking a four-point lead with just over two minutes on the clock. The team battled back and tied it up with less than one second left to send the game to overtime. Asphalt Green sealed the win in the second overtime period. Fans stormed the court to celebrate with the team.

Throughout the season, the team, led by Coach Secrett, showed tremendous growth. Elijah was named the MVP of the fourth-grade division. Congratulations, we can’t wait for next season!