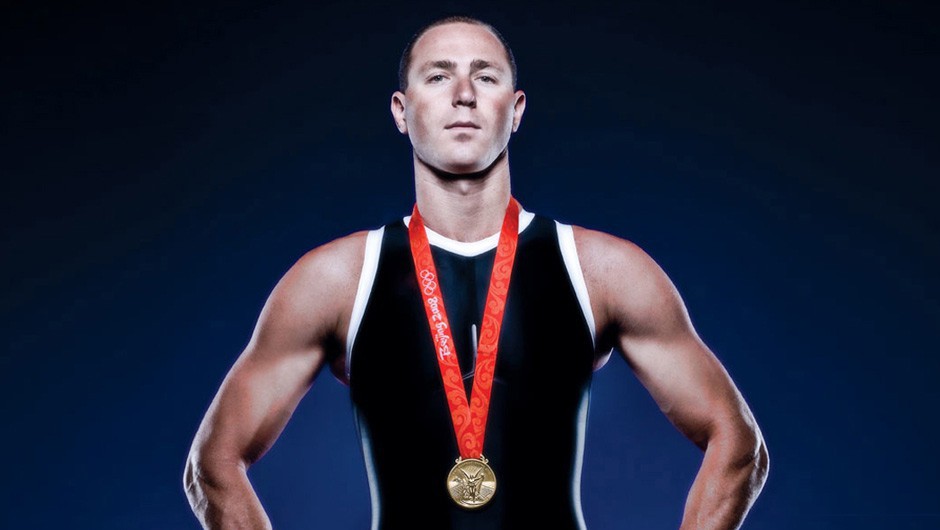 Eight-time Olympic medalist Jason Lezak—most known for his incredible come-from-behind victory as the anchor in the 4x100-meter freestyle relay at the 2008 Beijing Olympics—will be at the Big Swim Big Kick on May 7. Kids will have the opportunity to meet Jason and take photos.

When Jason Lezak was 5 years old, he stepped to the starting blocks for his first competitive swim race, a one lap, 25-yard event. The gun sounded, and Jason jumped into the pool. You can chalk it up to nerves, excitement, or adrenaline, but on that day, he could not swim straight. When many children completed the race, Jason was still making his way down the pool in a zigzag fashion. After a long two minutes, he finally touched the wall.

Flash forward to today: Jason swims 25 yards in 20 seconds. His first meet did not scream future Olympic champion, but he always had a way of surprising people throughout his career. Jason was not always expected to win, but he did it anyway. He had many setbacks, but they fueled even greater comebacks. He qualified for four consecutive Olympic Games—2000, 2004, 2008, and 2012—taking home medals at each.

“I knew [the Olympics] were definitely a possibility,” Jason says. “I had a dream, but it was a matter of whether I put in the effort to achieve the dream.”

Jason grew up in Irvine, Calif., and his parents put him in swim lessons when he was 2 years old, so he would be safe around water. He joined his first competitive swim team when he was 5 years old and had success, so he continued with the sport.

But swimming was not the only area where he excelled. He played multiple sports growing up and continued with swimming, basketball, and water polo in high school, earning All-American honors in the latter. It wasn’t until he accepted a scholarship from the University of California, Santa Barbara that swimming became his sole focus.

BOUNCING BACK FROM DISAPPOINTMENT AT OLYMPIC TRIALS

Jason qualified for the 1996 Olympic Trials, which at the time, he thought was his best shot at an Olympic berth. He was in his prime, but his races did not come together when they counted, and he failed to make the team.

The 1996 Olympic Trials were a reality check, and Jason realized how far away he was from his goal. He started having doubts. He would be 24 at the next Olympics, which was considered old for a swimmer at the time.

After disappointment, Jason knew he had to refocus. Everybody has setbacks, but success is measured by how you respond in difficult situations.

“It was about keeping my goals in mind,” he says. “Focus on yourself and work hard for yourself.”

He changed his attitude and earned a spot on the 2000 Olympic team, coming home with a gold and silver medal.

“I gained confidence. You go against people who are often times faster. All it takes is beating one person you weren’t expected to beat [and your confidence grows],” Jason says. “[After every race], I thought, ‘What can I do better next time?’ Even when I do my best, there are things to improve. I was always a student of the game.”

The U.S. was not expected to win, and up until the last 25 meters of the race, it looked like the team would take silver. The announcers had already handed the gold to the French, but Jason kept at it, closing the gap one stroke at a time. He knew his team was counting on him for gold.

“I’m a competitive person,” Jason says. “I didn’t want to give up. I had to dig down deep to get to that wall first.”

He had the swim of his life to touch the wall in 46.06, the fastest 100-meter freestyle split in history by nearly six-tenths of a second. The French team finished eight one-hundredths of a second behind, the closest finish in the event's history.

THE FINAL OLYMPICS AND WHAT’S NEXT FOR JASON

Jason qualified for the 2012 Olympics and took home a silver medal. His body was tired, and after the games, he decided it was time to hang up his swim cap and goggles. However, he is still involved in the sport by teaching swim clinics and through speaking engagements.

His advice to swimmers: Have fun.

“If you’re not having fun, you’re not going to do what it takes to be successful,” Jason says.

His goal is to instill positive values in the next generation of swimmers.

The Big Swim Big Kick is a free swim and soccer event for kids ages 6 to 10. Register today for a chance to meet Jason Lezak and get in on the fun!