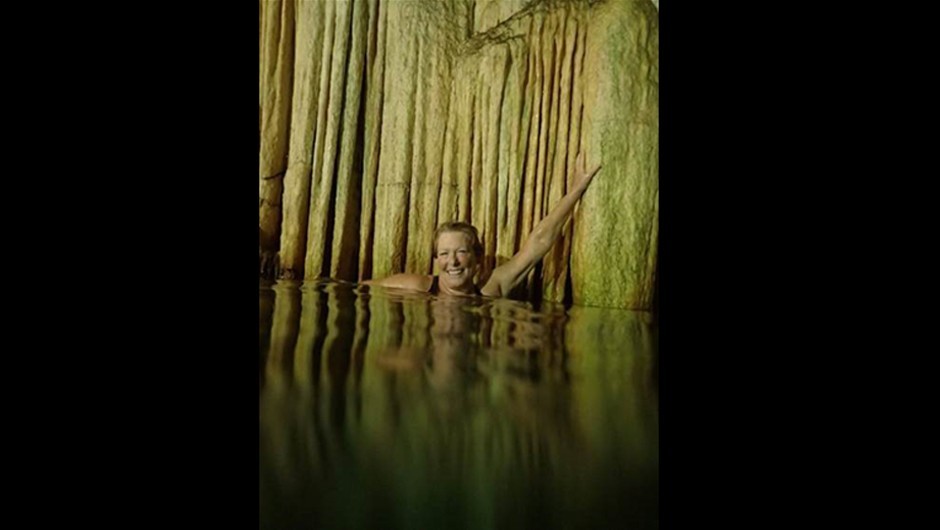 Four years ago, at age 62, Lyn Goldsmith jumped into a lake in Maine and fell in love with open water swimming. She was not a swimmer before that fateful day, but she unexpectedly and quickly developed a passion for it. The water simply brought her joy.

This past September, Lyn added her name to an exclusive group when she completed the 20 Bridges Swim, a 28.5-mile trip around Manhattan. The swim through the East River, Harlem River, and Hudson River took her 8:35:49.

The accomplishment felt extra sweet because of the journey it took to get there. The 2018 20 Bridges Swim was not Lyn's first attempt. She tried to complete the feat in 2017, but pain eight miles from the finish cut her swim short. She told herself that she would not quit on her second try.

"I'm not a competitive person, but I had no idea until I quit how painful it is not to finish," Lyn says. "I remember getting out of the water and onto the boat and all of a sudden it hit me that I had just quit. In that moment I decided I would never quit another swim unless I was drowning. I made up my mind before I got off the boat that I was going to do it again."

Lyn trained all winter at Asphalt Green and would get as many hours in the water as she could before work. She would swim with the AGUA Masters team and when everyone would go to breakfast, she stayed in the pool. She completed most of her open water swims in the summer at Brighton Beach and completed a longer week of training in Vermont.

Months of training would pay off of September 8. The conditions were favorable, and Lyn just wanted to enjoy the day.

"It's just such an iconic swim, Manhattan is such an amazing beautiful island, and I live here," Lyn says. "I've paddled around the island so many times, and it was just irresistible."

The biggest challenge during the race was the north wind. Typically, winds come from the south, so instead of the wind being an issue coming down the Hudson River, the waves were choppy coming around the south end of the island.

"It was part amazing and fun and part really challenging," Lyn says. "My kayaker was really having fun in the waves, but it wasn't so fun for the swimmers."

Lyn's favorite part of the race was by the financial center. She swam by the ferry terminal and waved to a tour boat. She said she felt like a tourist attraction.

Though Lyn felt pain in her shoulder, she was determined to stay the course. She had to slow down, but she knew she would get to the finish. When she did, the feeling was amazing, and she celebrated with the 15 other people who also completed the feat.

"Everybody had a great swim; everyone finished," Lyn says. "The day was amazing, fast, and exciting."

Lyn has no plans of slowing down. She feels like she can swim longer and farther and hopes to inspire others to get into open water swimming.

"I love how swimming makes me feel," Lyn says. "I don’t think of anything when I’m swimming except my stroke and the water. It’s just such a joyful experience. No lanes, no lines, no limits."