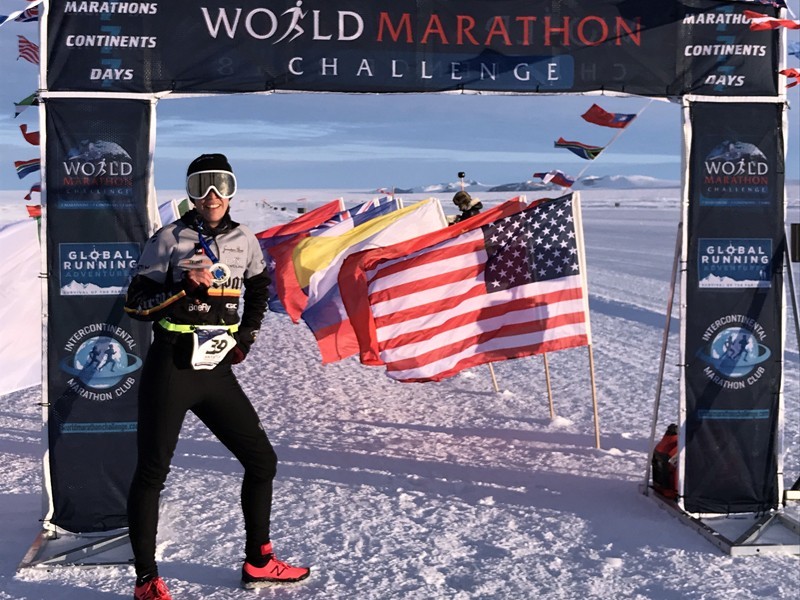 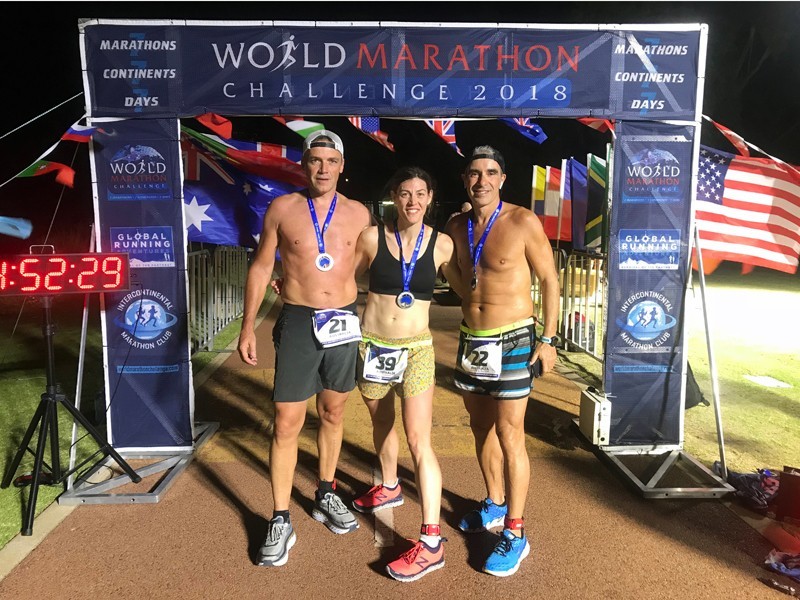 If you asked Meghan a year ago if she thought she would cross the finish line, she would not have believed you. After all, completing one marathon is daunting enough for most people. The thought of completing marathons in Antarctica, Africa, Australia, Asia, Europe, South America, and North America in 168 hours would have most people running the other direction. But Meghan is not most people, and she was inspired.

In 2017, Meghan and the Asphalt Green community lost a dear friend and beloved personal trainer and soccer coach Cyril Charles. When it came time to sign up for the World Marathon Challenge, she decided to raise acts of kindness in Cyril’s honor.

“Cyril was such a positive influence on my life,” Meghan says. “I had the opportunity to train with him for a number of years, and all he ever wanted for me was to reach my potential. [He] possessed a unique ability to elevate the spirits and performance of everyone around him. The best way I can accept a world without his encouragement is to cultivate similar actions.”

With a strong sense of purpose, Meghan could put her focus into training. However, unlike other endurance events, there is no book on how to train. Prior to 2018, only 11 women had completed the World Marathon Challenge. In 2018, 49 competitors finished, 12 were women.

Using her own coaching background and advice from previous racers and ultra-marathoners, she developed a plan that struck a balance between logging enough miles and recovery. She knew getting to the starting line healthy at the first stop in Antarctica was key. She relied on patience and mediation, and reading the acts of kindness people were spreading in between the grueling training hours kept her going.

“Mailed a friend going through a hard time a hand-written card,” “helped carry a woman’s groceries to the cab door since she had her hands full,” “volunteered with special needs adults,” and “gave a confused tourist a swipe on my metro card” were a few of the sentiments shared.

When Meghan arrived at the first race in Antarctica on January 30, she knew she had to trust in her training, but it was off to a bumpy start.

“In Antarctica, I basically had four sips of water the whole run [because the weather was deceptive]. Even though it was cold, we were directly in the sunlight, and I was dehydrated. After the race, there was only sausage to eat [because there was little time between the first two marathons], so I was pretty fatigued going into the second run [in Africa],” she says. “[After the second race], I was able to rehydrate and refuel, so I finished [the competition] much stronger. Surprisingly, I ended up eating Pringles for the last five days because it was the only thing that sat well in my stomach and gave me the salt and calories I needed.”

It takes a unique group of people to commit to the World Marathon Challenge, and throughout the journey she met many interesting individuals. There was a man with Parkinson’s, a couple of teachers, a woman who won Survivor, and high-profile businessmen, among others.

“The camaraderie was great,” Meghan says. “There were people of various fitness levels, some more experienced in running than others. I met some amazing people who were inspiring and raising money for incredible charities.”

Though all of the races were different and special in Meghan’s eyes, the one that stood out as her favorite was the third marathon in Australia, where she ran with two businessmen. They were telling stories and playing music, which made the miles go by fast. She remembers feeling more energized after the competition than when she started.

When Meghan got to the final marathon in Miami, she felt relieved. Just five loops by the water separated her from completing the World Marathon Challenge. Hundreds of screaming people with signs and a surprise visit from her sister pushed her through the final stretch.

“When I got to the last loop, all I was thinking was ‘I don’t have to run tomorrow,’” Meghan says. [Crossing the finish line] topped the feeling of any Ironman or other race.”

To celebrate, one of the competitors threw a party, and then she went out to a nice dinner, complete with champagne, with her sister and a friend who also cheered her on in Miami.

Reflecting on the experience, Meghan learned a lot about herself.

“I really do think you can accomplish whatever you put your mind to,” she says. “Any kind of endurance challenge is about honing in on why you are doing it. When you’re tired, exhausted, and hungry you have to have that purpose to come back to. For me, I kept thinking that Cyril would be so proud.”

Meghan finished in second place among the women. Proud would be an understatement.