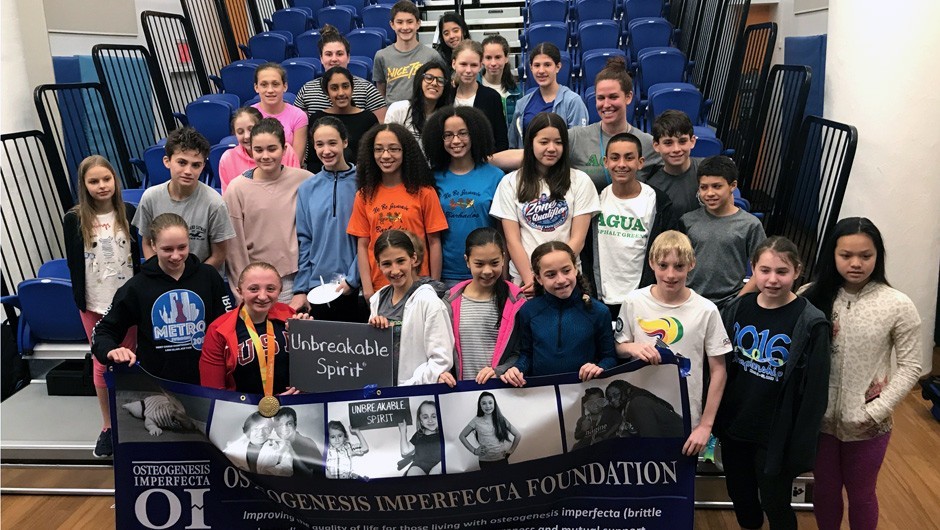 McKenzie Coan, four-time Paralympic medalist, stopped by Asphalt Green on May 20 to speak with our competitive swim team and unite with swimmer Jaden Sacks to participate in a swimathon, 50,000 Laps - One Unbreakable Spirit® Challenge, to raise money to find better cures for osteogenesis imperfecta, also known as brittle bone disease.

On race day, McKenzie Coan gets to the arena early, puts in headphones, and listens to music to calm her nerves. When it is time to compete, she walks on the deck and only looks at the pool. She does not hear the hundreds or thousands of people cheering or pay attention to her competitors. She takes a deep breath and remembers the hard work she put in during training. The starting buzzer goes off, and she races for gold.

McKenzie’s strategy has proved successful. She took the world by storm at the 2016 Rio Games, winning three golds and one silver medal, breaking the Paralympic record in the 50-meter freestyle. She was born with osteogenesis imperfecta, also known as brittle bone disease, and has broken over 30 bones in her lifetime.

“[Osteogenesis imperfecta] is something I have dealt with my whole life,” McKenzie says. “I want people to see me for my ability instead of my disability.”

Her winning attitude has taken her far in the sport and in life.

McKenzie grew up in the pool, beginning water therapy when she was a baby as a form of treatment for her condition. When her brother started on the swim team, she saw how much fun they were having and joined because she wanted to beat them.

“When I swim, I feel free,” she says. “On land, I use a wheelchair, but the freedom that water provides made me fall in love with the sport.”

As she continued to work hard, her times improved and she started beating able-bodied swimmers.

“I loved seeing people’s reactions [when I would win],” McKenzie says. “People were surprised I was in a wheelchair. They saw past my limitations.”

McKenzie has the drive to push herself and describes herself as a type A person. She wants to be the best she can be. Growing up, she didn’t think about the medals, but as she continued with the sport, they came as a result of her hard work.

McKenzie got her first taste of the Paralympics in 2012. She made her first international team two months before trials at 16 years old. The London Games were her first national team trip, and she made the 400-meter freestyle finals. She did not win a medal, but that only served at motivation to come back stronger in 2016.

The taste of success was addictive. She trained for two years at home, and in 2014, McKenzie started the next chapter of her life at Loyola University. Her new training environment has served her well.

Now, she has a team behind her and is surrounded by other para-athletes. Looking around, she sees people with limitations that do not faze them. The person next to her during a workout may have one arm but is putting in just as much effort. Her teammates inspire her, and when the Rio Games arrived, it was her time to shine.

“I came back focused, but this time I wanted to be on the podium,” she says.

McKenzie did just that and then some, walking away with three golds (her performance in the 50-meter freestyle set a new Paralympic record) and a silver medal.

“I knew that winning triple gold was a possibility, but I didn’t go in thinking about it,” McKenzie says. “After I won the 50 free, I was in shock. I wasn’t really a sprinter, but to go to finals, win, and break a record was exciting.”

However, the most emotional event for McKenzie was the 400-meter freestyle, what she considers her best event. When she won gold, she felt like everything came full circle.

“Being on the podium, watching the flag go up is a really special moment,” McKenzie says. “It was nice seeing family, friends, and coaches in the stands who helped me get there.”

McKenzie is not slowing down. She is committed to swimming through the Tokyo 2016 Paralympics, will finish her undergraduate degree at Loyola next year, and plans to apply to law school.

It is a lot to take on, but McKenzie has never shied away from a challenge. If the past is any indication, it will be no surprise if she finds herself on the podium again.

“People have told me I can’t, and that makes me more motivated to go out and prove them wrong,” McKenzie says. “The only limitations are the ones you put on yourself. You can do anything if you work hard and put in the time.”

Q&A with Maya DiRado, Breakout Star of the Rio Olympics