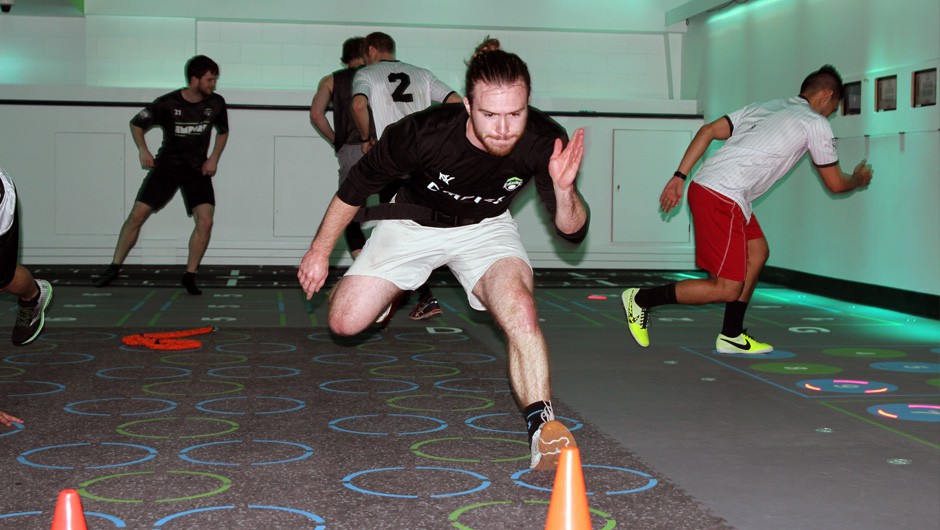 The New York Empire, the Tri-State area’s professional Ultimate Frisbee team, visited Asphalt Green to test their fitness in AG6. The athletes mixed up their conditioning for a day and rose to the challenge. Hear from team captain Ian Guerin on what the group thought of the class, and learn about the sport that is growing in popularity across the country.

Q: What did the team think of AG6?

A: If there is one thing that Ultimate players love, it's fun. AG6 was a tough workout that also had a playful nature to it, and that's something that the team can get behind.

Q: What was your favorite AG6 move?

A: Without a doubt, the best AG6 move was tossing the medicine ball at the pressure sensitive lights on the wall.

Q: How can the conditioning performed in AG6 be applied to Ultimate Frisbee?

A: AG6 is focuses on short bursts of energy, maximizing use of space, fast feet, and quick recovery. If we added a disc to the workout, it would be very reminiscent of Ultimate. The quick movements and explosive steps involved in AG6 translate directly to the game.

Q: What is training typically like for a professional Ultimate Frisbee player?

A: Training for Ultimate requires a lot of athleticism. Off the field, we typically focus on weight training for injury prevention and cardio workouts to maintain and increase stamina. On the field, we practice a lot of repetitions in different defensive and offensive systems. We focus on game-time situations, so we are prepared for anything during competitions.

Q: What kind of conditioning do Ultimate Frisbee players typically do?

A: A conditioning practice usually involves time on the track doing sprint workouts that vary between 100-and 400-meter runs. Then, we put on cleats on and get some shorter, 5-to 30-meter runs in that involve a lot of direction change. Agility is king and queen in Ultimate Frisbee.

Q: How did you get involved in Ultimate?

A: I started playing when I was a freshman in college. Most colleges have club sports teams, and a rapidly increasing amount have club Ultimate teams. I was a soccer player all my life, but when I joined Ultimate, the community pulled me in and helped me learn the game quickly.

Q: Why did you fall in love with the game?

A: I fell in love with Ultimate because the game emphasizes sportsmanship. Players value honesty and friendly competition. In highlight videos you often see players of opposite teams congratulating each other on strong plays. To me, that is amazing. At the end of the day, playing with sportsmanship is something to be proud of.

Q: How has the sport grown over the years?

A: Ultimate Frisbee has grown steadily since it its inception in the 1960s. The sport is young, and as such, it has things that other sports don't have. The community is built around sportsmanship and acceptance. The idea behind Ultimate is that players can both compete at a high level and play with integrity at the same time. With that, Ultimate has gone from being a backyard sport to being featured on top sports channels and having a large professional league that spans the country.

Q: What advice would you give to someone who wants to start playing Ultimate?

A: If you are interested in Ultimate, the best advice I have for you is to get out and play. There are leagues all over the city for people of all ages. The sport tends to attract people who are friendly and welcoming, so don't be shy about not knowing anyone your first time out. You might even find you're a natural!

Q: What is a fun fact about the team?

A: The New York Empire takes a lot of pride in not having superstar player. I think that is pretty unique in top-level sports, where many players clamor to be in highlight reels and have their names mentioned. On Empire, we play hard for our teammates and love that we have earned ourselves a faceless identity.

We are a fun team to watch. Fast-paced Ultimate has a natural beauty to it, and if you really want to get a feel for the sport you should come out and see a game!

Think you're up for the AG6 challenge? Register now!