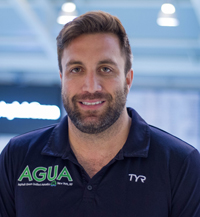 Originally from Miami, Florida, David Rodriguez has been coaching since 2005. He joined the Asphalt Green Unified Aquatics (AGUA) staff in 2012 with a coaching philosophy focused on long-term development and embracing the learning process.

Since taking over as Head Coach, Rodriguez’s athletes have broken countless barriers for AGUA. Notably, he coached two athletes to the 2019 World Junior Championships in Budapest, Hungary. Both swimmers raced to personal bests, including a silver-medal performance by Isabel Gormley in the 400 IM. Five of his athletes have also achieved World Top 100 eighteen and under rankings.

On the national stage, Rodriguez led two swimmers to the U.S. Olympic Trials in 2016, and five in 2021. His athletes have attained multiple top-eight finishes at USA Swimming Junior Nationals, including one Junior National Champion in 2019. Rodriguez’s swimmers have also combined this success with academic excellence, earning over twenty Scholastic All-America honors since 2015.

Most recently, AGUA earned 2021 USA Swimming Gold Medal Status for the first time in program history - an honor awarded only to the top twenty teams in the country. Rodriguez was also named Head Coach of USA Swimming’s National Diversity Select Camp in 2019, as well as Metropolitan Swimming Senior Coach of the Year in 2018 and 2019. 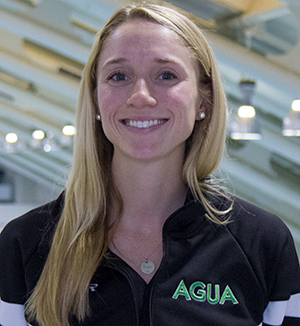 Hailey grew up swimming in Fairfax, Virginia, where she was a Junior National qualifier for the Nation’s Capital Swim Club. She continued her career as a student athlete at the College of William and Mary, an NCAA Division I school. Hailey served as co-captain of the Tribe team, and in her senior year became the first swimmer in school history to qualify for the US Olympic Trials in the 200-meter backstroke. The two-time Colonial Athletic Association champion was named Tribe Club’s Woman Senior Athlete of the Year.

After graduating in 2012 with degrees in kinesiology and elementary education, Hailey began her coaching career volunteering with the College of William and Mary swim team. In 2013, she moved on to become the assistant swim coach at Western Albemarle High School and spent two years as the assistant director of competitive swimming for the Shenandoah Marlins Aquatic Club.

Since arriving in New York in 2015, Hailey has utilized her coaching talents as the lead instructor at Swim-City, a learn-to-swim company based in Manhattan. During her time there, she coached over 100 swimmers in residential buildings around the city. Hailey joined Asphalt Green in 2017. 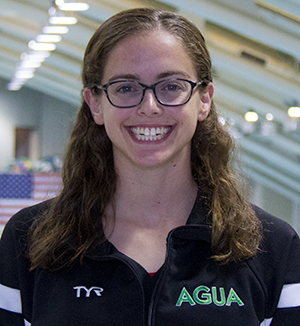 Diana grew up in West Haven, Connecticut, where she set five school records for West Haven High School and four team records for the Hopkins Mariner Swim Team. As a student athlete at Keene State College, Diana was a four-time school record holder and captained the swimming and diving teams. In her senior year, Keene State College named Diana the Strength and Conditioning Athlete of the Year and the College Female Athlete of the Year.

Diana graduated in 2015 with a Bachelor of Science in exercise science and a specialization in coaching. She remained at Keene State College as an assistant coach, fostering one US Olympic Trials qualifier and 10 All-American performances.

She moved on to coach for Greenwood Swimming, where her accomplishments include leading one athlete to a bronze medal at 2016 Rio Paralympic Games. She has also coached USA Swimming national top 10 athletes, National Zone Select Camp qualifiers, and New England age group champions and record holders. Diana joined Asphalt Green in 2016. 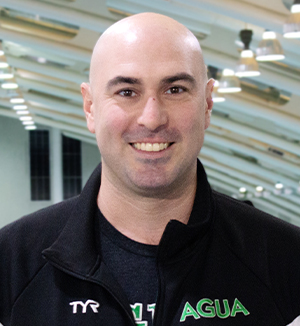 John has been a swimming coach since 2009 when he started with the New York Sharks swim team as an assistant coach near his hometown of Blauvelt, New York. He was made head coach in 2011. While he was there, he trained five swimmers who qualified for USA Swimming Junior Nationals and two who qualified for Senior Nationals.

From 2013 to 2015 he fulfilled the role of head age group coach at the Phoenix Aquatic Club. While he coached there his athletes won multiple National Age Group Top 10 rankings and Metropolitan Local Swimming Committee records. In 2014 He coached over 20 swimmers in his age group.

In 2015 John returned to the New York Sharks in Rockland to work as a head senior coach. Over his decade-spanning career he has coached athletes to 13 Metropolitan LSC records, and he was named Metropolitan Age Group Coach of the Year in 2015. From 2018 to 2020 he served on the Metropolitan Board of Directors as Senior Vice Co-Chair. John joined Asphalt Green as an AGUA coach in 2021. 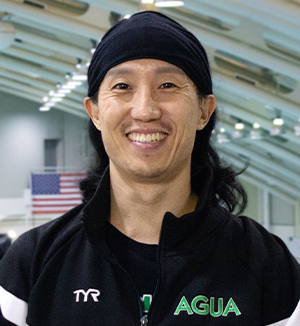 Youngho was born in Busan, South Korea, where he developed a lifelong love of swimming. He received two MVPs from the Bucheon City and Jecheon City Mayor’s Cup Masters swim meets. He also runs a popular Korean-language YouTube channel that teaches swimming techniques and provides dryland tutorials to over 25,000 subscribers.

Youngho started his coaching career working with Olympic medalist Gary Hall Sr. at The Race Club in Florida. After moving to New York, he worked with the National Group at the 92nd Street Y. He has also led stroke clinics for Team New York Aquatics and has served as a private instructor for all ages and ability levels. Youngho joined Asphalt Green in 2021 after a stint as the head coach for the Masters team at the McBurney YMCA.

Youngho values the concept that small, consistent improvements over a period of time will combine to make the biggest differences. His aim is for his students to be able to look back at their time swimming and see the value of consistent hard work and how it changed their life for the better in and out of the pool. 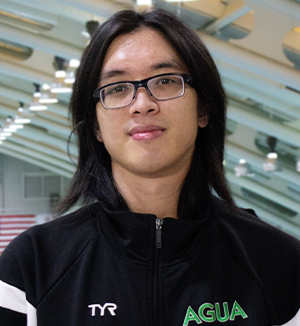 A Queens native, Jeff got his start coaching in 2009 with the LaGuardia Aquatic Club Twisters, where he worked for 12 years. He led the team to the 10 and under Team Championship at the 2013 Long Course Junior Olympics, and many other years they placed in the top 3. His age group won Top 16 USA National Age group recognition, multiple Metropolitan Local Swimming Committee records, as well as Sectional and Junior National standards.
In 2019 Jeff moved to the New York Sharks where he took a position as the head coach of the AG2 and AG3 groups, and as the program director for strength and conditioning for all age levels. Despite the truncated competition schedule for 2020, Jeff’s tenure saw a record number of Sharks swimmers qualify for the Speedo Sectionals and Futures. More recently, Jeff was a video analyst and personal trainer at SwimLabs Westchester, until he joined Asphalt Green in 2021. 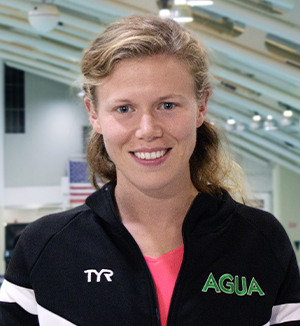 Caroline was born in Scarsdale, New York, and spent her early life travelling between her hometown and Paris, France. She started swimming competitively at age 9 and swam for Vassar College for four years where she set school records in the 200- and 400-yard individual medleys. She began her coaching career shortly after graduation, taking a position at a swimming school in Ivry, France.
Caroline holds a bachelor’s degree in French and francophone studies from Vassar and a master’s degree in education from Hunter College School of Education. She is an experienced educator with a deep commitment to children’s physical and mental well-being who shares AGUA’s values and emphasis on a strong technique base and looks forward to passing on the love of sport and the sheer joy of swimming. 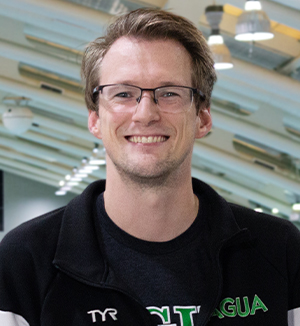 Growing up in West Lafayette, Indiana, Andy was a Junior National qualifier for Boilermaker Aquatics. He went on to swim at Division I Southern Illinois University, where he was named captain. Andy began his coaching career at the Pine Crest School, helping develop three Olympic Trials qualifiers. He joined Asphalt Green in 2021.
Andy also writes and reports on the swim world. Most recently, he researched swimming, artistic swimming, and open water swimming for NBC during the 2021 Tokyo Olympics. He has previously published work in Swimming World Magazine covering the World Championships and USA Swimming National Championship, among other topics 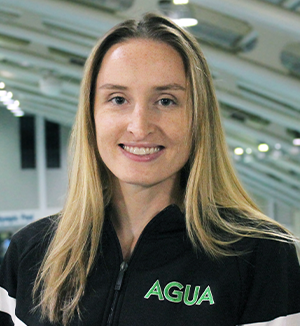 Born in New Rochelle, New York, Maggie has been swimming competitively for a large part of her life. She is a former Futures, Sectionals, and Junior National qualifier and a high school All-American. She swam on the Blue Hens team at the University of Delaware where she set records in the 200- and 400-yard freestyle relays. She got her start coaching the summer after she graduated high school, and since then she has coached several athletes who have competed at the NCAA Division I level.
Maggie thinks swimming is an incredible sport with much to offer regardless of an athlete’s ability. Setting goals, working hard, and being a part of a positive and supportive team are beneficial for personal growth and development. 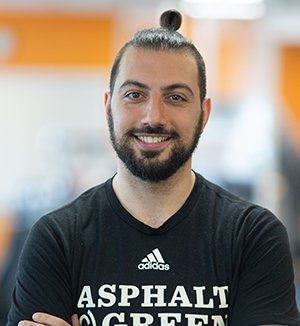 Art has diverse experience training clients of all ages and abilities, specializing in sports performance. An avid athlete, his passion for sports led him to pursue a career in personal training. He is a National Strength and Conditioning Association Certified Strength and Conditioning Specialist, USA Track and Field Level 1 coach, certified functional movement screening specialist, and holds a Bachelor of Science in nutrition and exercise science from Queens College.
Art’s training approach is to identify the specific needs of each swimmer and safely progress through a strength and conditioning program. He addresses an individual’s asymmetries to create a fitness regimen that will improve health and physical performance.

Find all the AGUA information you need right here! Simply bookmark this page for easy access to all things AGUA.