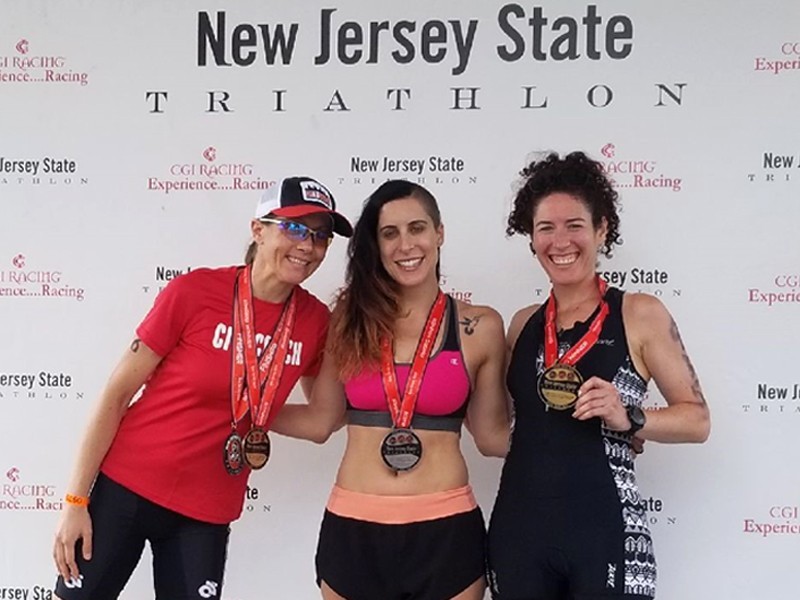 Jessica (left) after her third-place finish at the New Jersey State Triathlon.

Jessica with family after completing the 2016 Lake Placid Ironman.

When AGUA Masters swimmer Jessica Purcell crossed the Louisville Ironman finish line in October 2018, she felt relieved. Jessica describes it as the most mentally challenging race she's completed to date—the water current was so strong that the swim distance was shortened, the weather was a cold 50 degrees and raining, and she couldn't feel her hands and feet for a good portion of the Ironman. There was even a moment she considered not completing the race.

Jessica kept going despite the miserable conditions. Nevertheless, she prevailed. It was the seventh time Jessica crossed the finish line of an Ironman—a 2.4-mile swim, 112-mile bicycle ride, and 26.2-mile run. However, a life-changing event in 2009 put her future in the sport in question.

In 2009, Jessica was on top of the world. She got married in April, was planning to move to Washington, D.C., and was in the best shape of her life. Jessica had even qualified as an elite triathlete in her age group.

One Saturday in August 2009, she and her husband left their apartment for a final bike ride in the New York City area that would change Jessica's life. She was in a near-fatal bike crash that fractured bones in her face, required brain surgery, time in the ICU, and a year's worth of outpatient therapy.

The recovery was long, but the thought of racing again kept Jessica's spirit up. In fact, she believes that being physically fit played a factor in surviving the cycling accident. Before the accident, the bike was her favorite leg of the triathlon, and her passion for cycling didn't waver after the crash.

"Early on [during my recovery], I really wanted to get [back] into racing. No part of me was ever afraid of cycling. I didn't have any recollection of the crash, and I still loved the bike just as much," Jessica says.

She has always been an athlete; she swam in high school and got into triathlons in 2006 while in law school. In fact, joining the AGUA Masters team in 2018 was a gift to herself after she finished paying for law school. After the accident, Jessica was more appreciative about what her body could do.

"The human body is capable of much more than we assume it to be," Jessica says. "All you have to do is try, and sometimes you'll surprise yourself."

Swimming with the AGUA Masters team has been one of the best things for Jessica. At first, she was nervous because she had not swam with a team in years. But when she arrived at her first practice, everyone was welcoming, and she performed better than she had predicted.

"I think swimming, in particular, has taught me that the first step is always the hardest," she says.

As of right now, Jessica does not have any triathlons on the calendar. Since the accident, she has been tackling races at full speed. Now, she is in a place where she can enjoy her workouts, nurse some injuries, and relax.

"I like the way it makes me feel," Jessica says. "[Training] makes for a healthy body and mind and some good adventures."